Why Hair Coverings with Sheitel for Married Jewish Women

In many traditional Jewish communities, women wear head coverings after marriage. This practice takes many different forms: hats, scarves, and kosher wigs (Sheitel) all cover and reveal different lengths of hair. Many Jewish women only don the traditional covering when entering or praying in a synagogue, and still others have rejected hair covering altogether. What is the basis for this Jewish practice, and what are some of the legal and social reasons for its variations? 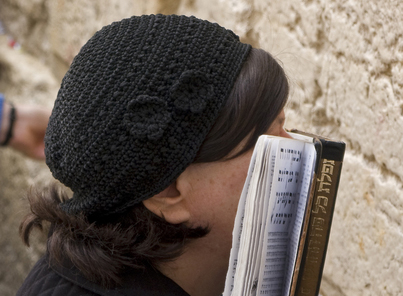 The origin of the tradition lies in the Sotah ritual, a ceremony described in the Bible that tests the fidelity of a woman accused of adultery. According to the Torah, the priest uncovers or unbraids the accused woman’s hair as part of the humiliation that precedes the ceremony (Numbers 5:18). From this, the Talmud (Ketuboth 72) concludes that under normal circumstances hair covering is a biblical requirement for Jewish women.

The Mishnah in Ketuboth (7:6), however, implies that hair covering is not an obligation of biblical origin. It discusses behaviors that are grounds for divorce such as, “appearing in public with loose hair, weaving in the marketplace, and talking to any man” and calls these violations of Dat Yehudit, which means Jewish rule, as opposed to Dat Moshe, Mosaic rule. This categorization suggests that hair covering is not an absolute obligation originating from Moses at Sinai, but rather is a standard of modesty that was defined by the Jewish community.

Elsewhere in the Talmud (Berakhot 24a), the rabbis define hair as sexually erotic (ervah), and prohibit men from praying in sight of a Jewish woman’s hair. The rabbis base this estimation on a biblical verse: “Your hair is like a flock of goats” (Song of Songs 4:1), suggesting that this praise reflects the sensual nature of hair. However, it is significant to note that in this biblical context the lover also praises his beloved’s face, which the rabbis do not obligate women to cover. Though not all would agree, the late medieval commentator, the Mordecai, explains that these rabbinic definitions of modesty–even though they are derived from a biblical verse–are based on subjective communal norms that may change with time.

Historically speaking, Jewish women in the talmudic period likely did cover their hair, as is attested in several anecdotes in rabbinic literature. For example, Bava Kama (90a) relates an anecdote of a Jewish woman who brings a civil suit against a man who caused her to uncover her hair in public. The judge appears to side with the woman because the man violated a social norm. Another vignette in the Talmud describes a woman whose seven sons all served as High Priest. When asked how she merited such sons, she explained that even the walls of her home never saw her hair (Yoma 47a). The latter story is a story of extreme piety, surpassing any law or communal consensus; the former case may also relay a historical fact of practice and similarly does not necessarily reflect religious obligation.

Throughout the Middle Ages, Jewish authorities reinforced the practice of covering women’s hair, based on the obligation derived from the Sotah story. Maimonides does not include hair covering in his list of the 613 commandments, but he does rule that leaving the house without a chador, the communal standard of modesty in Arabic countries, is grounds for divorce (Laws of Marriage 24:12). The Shulhan Arukh records that both married and unmarried women should cover their hair in public (Even Haezer 21:2), yet the Ashkenazic rulings emphasize that this obligation relates only to married women. The Zohar further entrenches the tradition by describing the mystical importance of women making sure that not a single hair is exposed.

Varying Interpretation in the Modern Era

Today, in most Conservative and Reform communities, women do not cover their hair on a daily basis, though in some synagogues women still cover their heads during prayer. A Reform responsum(1990) energetically declares: “We Reform Jews object vigorously to this requirement for Jewish women, which places them in an inferior position and sees them primarily in a sexual role.”

Both the Conservative and Reform movements allow, and in some cases encourage, Jewish women to cover their heads when praying or learning Torah, because of the requirement to wear a kippah. These rulings take head covering out of the realm of female sexual modesty, and instead define it as a ritual practice–for men and women alike–that signifies respect and awareness of God above.

In the contemporary Orthodox world, most rabbis consider hair covering an obligation incumbent upon all married Jewish women, however, there is variation in the form this takes. Some maintain that women must cover all their hair, for example the Mishnah Berurah forbids a man from praying in front of his wife if any of her hair is showing.

A few Orthodox rabbis in the early twentieth century justified women’s decisions not to cover their hair at all, including the Moroccan Chief Rabbi in the 1960’s, HaRav Mashash, and the lesser known American Modern Orthodox rabbi, Isaac Hurwitz–though they drew criticism for this opinion. In their writings, they systematically review the sources surveyed above and demonstrate that those sources describe a social norm of modest dress, but not a legal requirement.

“Now that all women agree,” Rabbi Mashash writes, “that covering one’s hair is not an issue of modesty and going bare-headed is not a form of disrespect–in fact, the opposite is true: uncovered hair is the woman’s splendor, glory, beauty, and magnificence, and with uncovered hair she is proud before her husband, her lover–the prohibition is uprooted on principle and is made permissible.”

What Jewish Women Do

While only a few traditional rabbis have reinterpreted the law of hair covering, throughout the generations women have acted on their own initiative. The first sparks of rebellion occurred in the 1600’s, when French women began wearing wigs to cover their hair. Rabbis rejected this practice, both because it resembled the contemporary non-Jewish style and because it was immodest, in their eyes, for a woman to sport a beautiful head of hair, even if it was a kosher wig. However, the wig practice took hold and, perhaps ironically, it is common today in many Hasidic and ultra-Orthodox communities. In some of these communities the custom is for women to wear an additional covering over their kosher wig, to ensure that no one mistakes it for natural hair.

As the general practice of covering one’s head in public faded in Western culture in the past century, many Orthodox Jewish women also began to go bare-headed. Despite rabbinic opinions to the contrary, these women thought of hair covering as a matter of custom and culture.

Many Jewish women who continue to cover their hair do not do so for the traditional reason of modesty. For example some women view head covering as a sign of their marital status and therefore do not cover their hair in their own home. Others wear only a small symbolic head covering while showing much of their hair. Also in many communities, women have persisted in covering their hair only in synagogue.

In recent decades, there is an interesting trend among Jewish women who have learned the Jewish legal sources for themselves, due to advances in women’s education, and have decided to adopt a stringent stance toward hair covering, rather than following the more permissive norms of their parents’ communities. An entire book, Hide and Seek (2005), tells these women’s stories.

Modesty, as a Jewish value, is continually being refined and redefined by Jewish women and their communities. Just as some women have chosen to deemphasize hair-covering as a marker of modesty, in other communities women may choose to embrace it, developing and reinforcing a more traditional communal norm. As modesty is subjectively defined, the community to which one wishes to belong may play a large role in determining practice. The decision to cover one’s hair rests at the crossroads between law and custom, personal choice and community identification.

For Stylish Orthodox Women, Kosher Wigs That Aren't Wiggy
What is Sheitel?
The Secret History of Sheitels (Kosher Wigs)
Why Hair Coverings with Sheitel for Married Jewish Women